The history of Castiglion del Bosco dates back to 1100 A.D., amidst armed struggles and assaults. This corner of Tuscany also bears the imprint of great Sienese families, who settled and brought here the artistic genius of Pietro Lorenzetti, whose precious Annunciazione dei Santi (1345 A.D.) still adorns the hamlets tiny church. Agriculture always played a prominent role on this great estate: for over 800 years now, Castiglion del Bosco has been flourishing within the same boundaries, almost as a world apart. Here still stand its borgo, its school and stables, its crops and fields, its vineyards and olive groves. 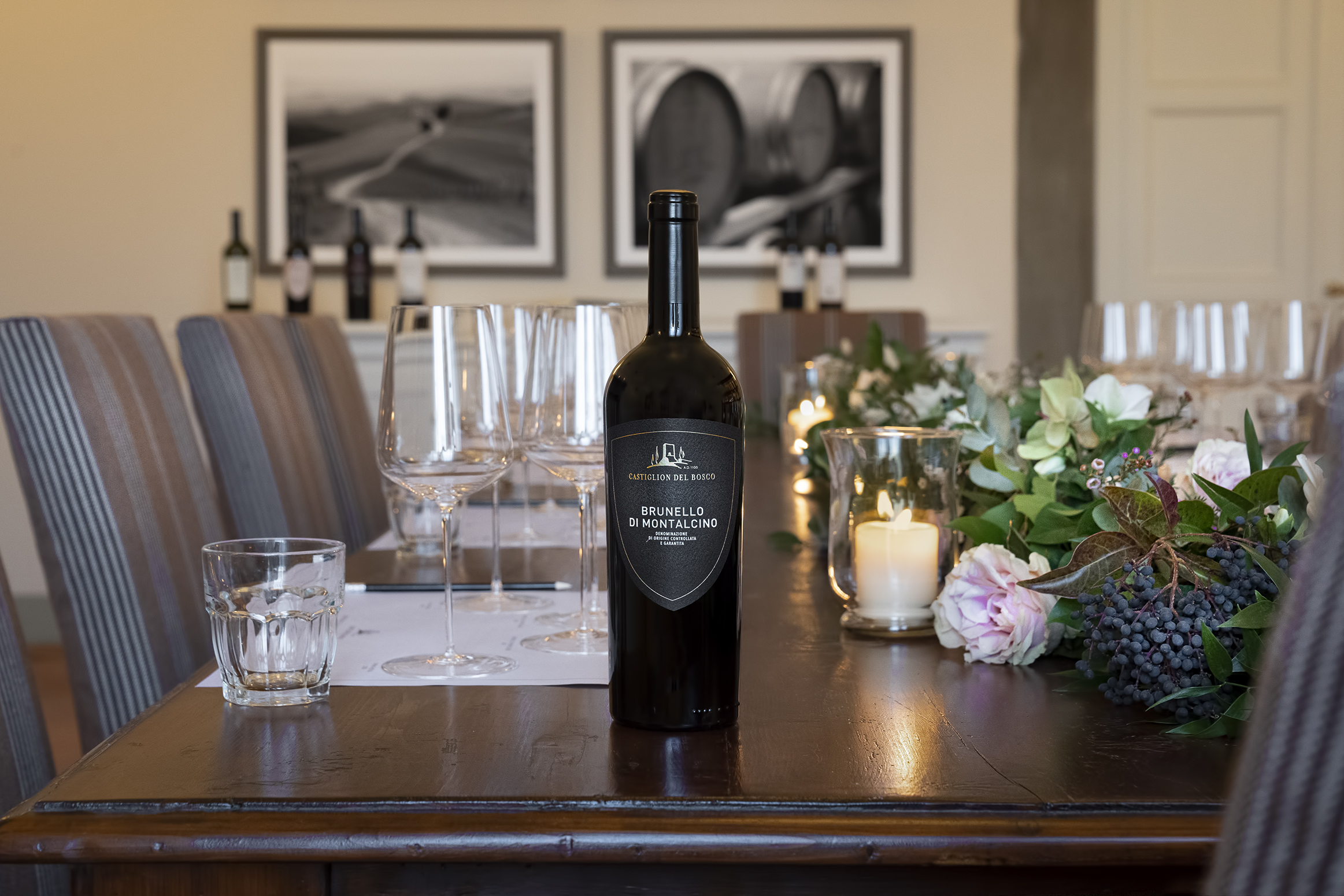 Our Brunello di Montalcino 2016 has received 99 points by the renowned wine critic James Suckling and it came in second place in his Top 100 Wines of Italy 2020, where are listed the best wines of any Italian wine region and appellation.

The Zodiac Rooster Brunello di Montalcino 2010 Riserva received 99 points from James Suckling: A beautiful Brunello that shows the unique character of this great vintage. Elegant, beautiful, powerful and youthful this wine is gorgeous now but will be great in 2020. Only 688 magnums made.

Millecento Wine Club was funded, inspired by this unique corner of Tuscany and the fine wines of Castiglion del Bosco, is meant to share our passion with a small group of wine enthusiasts and collectors.

A limited edition Brunello di Montalcino is launched, titled Zodiaco. This fine wine is named after a tiny parcel of vineyard in the very best position. Every vintage is celebrated with a tailored label depicting the corresponding Chinese Zodiac sign, designed by leading Asian artists.

This top vintage marks the beginning of the new Riserva di Brunello Millecento, whose name pays tribute to the year in which the fortress, the estate’s symbol, was erected. This Brunello is an achievement of our goal, said winemaker Cecilia Leoneschi. It’s a riserva that contains a piece of each of us. The wine enjoyed immediate and international critical acclaim.

Work began on Castiglion del Bosco Golf Club, completed in 2010, with a stunning 18-hole course designed by Tom Weiskopf. The only private golf club in Italy.

Val d’Orcia is acknowledged as a place of outstanding universal value by UNESCO, recognizing Castiglion del Bosco as a World Heritage site.

The new winery is built, boasting a capacity of 3,000 hectoliters. Constructed across two levels, the modern, efficient cellar is half-concealed by the hillside. The first vintage of Brunello di Montalcino Campo del Drago 1999 is released to market, made in the new cellar.

After beginning as a wine producer at Tenuta Prima Pietra in Riparbella, in Northern Maremma, Massimo Ferragamo acquired Castiglion del Bosco and initiated restoration of the estate’s historic sites – renovation of the Borgo and villas, modernization of the facilities, and innovating the winemaking and cellars.

The Art, Nature and Culture Park of Val d’Orcia is established. The parkland, which surrounds the Castiglion del Bosco estate, is a Protected Natural Area of Local Interest committed to increasing knowledge of the cultural and environmental heritage, as well as the production and sale of local products.

Castiglion del Bosco is a founding member of the Brunello di Montalcino Wine Consortium, one of the earliest Italian wines to earn Denominazione di Origine Controllata (DOC) and Denominazione di Origine Controllata e Garantita (DOCG) status. There were 25 founding members, totaling a production of approximately 850,000 bottles, while today’s production exceeds 6,000,000 bottles and the consortium is comprised of 140 wineries.

The Biondi brothers, then owners of the estate, received leading international accolades for their wines.

The fresco behind the altar in the San Michele Arcangelo church, covered with plaster over the centuries, was rediscovered by Priest Don Giuseppe Lazzaroni. In 1930, art historian Cesare Brandi attributed it to Pietro Lorenzetti.

With a granducal motuproprio, Leopold II instituted the new Montalcino community, to which various communities were aggregated, including Castiglion del Bosco.

Following the destruction of the castle and the decimation of the population, life resumed in the Borgo and the countryside became settled again. At that time the owner of Castiglion del Bosco was the noble Del Cotone family, who had the S. Michele Arcangelo church in the Borgo restored in 1684.

The castle became a refuge for the so-called Party of Nine, who continued reprisals stopped Maremma provisioning from reaching Siena. The Siena Republic sent its troops who defeated the claimants and set fire to the fortress. It is believed that the old San Michele church was abandoned immediately after these clashes and that the parish church moved to the church inside the Borgo, where it still stands today.

Pietro Lorenzetti (1280-1348) finished his Annunciation and Six Saints in the San Michele Arcangelo church, in the heart of the Borgo. On the right you can see the saints Archangel Michael, Bartholomew and Francis of Assisi; on the left, saints Anthony the Great, John the Baptist and Stephen.

Sienese Ciampolo Gallerani declared himself lord of the fortress. He claimed that one of his descendants, Cecilia Gallerani, was the girl depicted by Leonardo da Vinci in his famous painting “Lady with an Ermine” (1488). On his death, in 1338, Castiglion del Bosco fell under the rule of the Piccolomini family, who initiated widespread renovation of the fortifications.

Castiglion del Bosco occupies a strategic position in the Siena Republic, subject to higher property taxation than all the other estates. During the thirteenth century the castle underwent a series of armed assaults by Montalcino to remove Castiglion del Bosco from Sienese rule.

The castle is erected in classic medieval style. At the dawn of the thirteenth century, the Cacciaconti family of Trequanda had stone walls built around the stronghold that stands on the hilltop, still visible today with the stone tower.

The Via Francigena is established, travelled for centuries by thousands of pilgrims from Canterbury to Rome. The road passes through the estate, where pilgrims sought shelter in the old San Michele Arcangelo church, situated about a mile from the Borgo.

The idea of our ​​Wine Friends is to share our passion for this wonderful land, revealing the secrets of Castiglion del Bosco and spreading news about our Estate and its wines to all of our supporters around the globe. For us it would be a source of pride to welcome you into our Family and we invite you to become a Castiglion del Bosco Wine Friend. So you have the unique chance stay in touch with us, knowing what happens in our cellar and receive special offers on our wines, by receiving a dedicated newsletter.